I am all in favour of foraging in the wild and have been waiting for the chance to try squirrel for a while (Grey Squirrels are non native pests in the countryside causing damage to trees and forcing our smaller native Red Squirrel out of their habitat and towards extinction).

In November 2012 we were returning a vehicle to a friend so I was following Andy up a lane when he accidentally hit a squirrel. I stopped to put it out of its misery but it died anyway before I had the chance. It was a nice young male in his prime, fattened up for the winter, so would have been a shame to waste.

I decided to do the squirrel justice I would use every possible part of it. (beware – some of the pictures below are a bit graphic!) 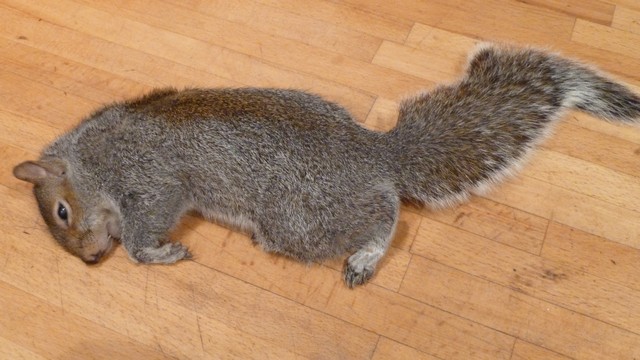 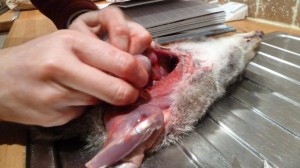 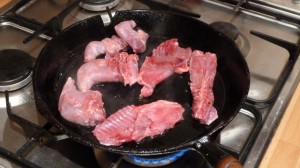 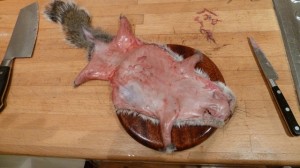 scraping the skin before curing 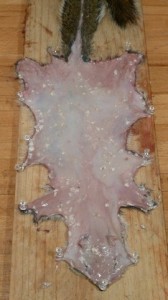 Once the skin was scraped I decided to use an ancient method of tanning – brain tanning. Every animal has enough brains to tan its own hide. I mixed the brains into warm water to made a paste then spread it over the skin and left it overnight. 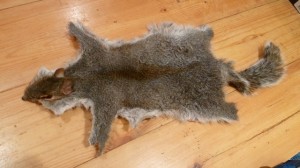 The finished hide. After the brain mixture had been left overnight I spent a whole morning stretching and working the skin over the end of a wooden broom handle until it resembled suede. Then I oiled it with neatsfoot oil to keep it supple.

The hide is now in the cupboard waiting for a use to present itself… It is a very pleasing item and was a very enjoyable and educational experience. I’m glad my first attempt at curing a hide naturally was something small!

This entry was posted in Latest news, Sidebar. Bookmark the permalink.